My wife and I have often discussed over the years of traveling the roads of the western United States. Lord knows, I’ve done the LA-San Diego to San Francisco trip maybe thirty times, even the SF to Phoenix interstate dance a few times. Twenty-five years ago we went north to Portland and Bend, Oregon. But the real west, the old west of cowboy lore and Injuns and pioneers and mountains has eluded us – and what about the new West – they were all there to be seen. And we, for forty-five years, had been very remiss.

A favorite high school author (and still to be sure) was John Steinbeck and when his book Travels with Charley was published in 1962--it became a favorite. It teased me as a teenager about America and the places that were beyond the prairies of the Chicago and Midwest which eventually lead to a solo cross-country jaunt in 1969 to LA and San Francisco. Two years later my bride and I moved from Chicago to San Francisco taking the still, under construction in places, interstate system using I-70 to Denver, south on I-25 to Albuquerque, west on I-40 (some of the old Route 66), and eventually stopping at the Grand Canyon, Las Vegas, and finally San Francisco. That was April 1971.

In 1982 another American highway travelogue was published, and like Steinbeck, William Least Heat-Moon in his Blue Highways, tried to find the true American—who ever they are—by traveling the two lane highways of America, not the high speed interstates. His book, remarkable for its insight, clarity, and humor, again struck a cord in my traveling soul. But for the past twenty-five years Europe and other exotic places called and we answered. The western trip seemed to elude us, “Maybe next year.” Well this was finally the year.

Our goal was a simple clockwise loop, from Walnut Creek to Walnut Creek. This was not to be a camping trip, no sleeping under the stars. My idea of camping includes marble countertops in the bathroom (call me a retired boy scout). At my age crawling out of a sleeping bag is not a pretty sight. But it was also not going to ultra-first class, economy is good if there’s legroom.

Steinbeck along with his traveling companion, Charley the poodle, towed a trailer (now in his Salinas museum) behind a new pickup truck. Heat-Moon drove a green van with a camp stove and portable toilet. Sorry guys – AARP approved hotels were our base line and certainly anything above that was more than acceptable. Our horse was a red Ford Escape with 3000 miles on it when we rolled down the driveway. Our goal was to see as much as we could in seventeen days. The route is posted below. 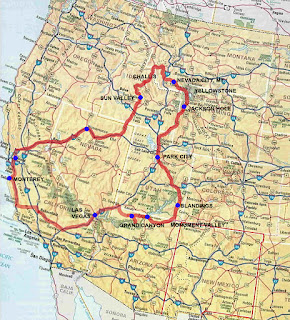 First Leg:
Nevada and Idaho and Montana
I worked as a consultant to a mining company back in the late 1970s designing a work camp and support housing near a town called Challis, Idaho. I wanted to see what had changed.
We went east through Reno onto Wells, Nevada then north into Idaho and through Twin Falls. The last time I’d been in Twin Falls was the late 70s. The population then was about 25,000 people and agricultural based – the shock of driving through this now very modern upsized town of more than 46,000 was stunning (I’m sure the population was well above that in the surrounding county). Construction and new growth was everywhere – and as we were to find out almost everywhere - there has been tremendous growth in the west during the last twenty-five years. After spending a few days in Ketchum and Sun Valley (where Hemmingway lived from 1935 to 1947 and later died) we headed north into Challis and discovered almost nothing had changed in forty years. It is still a simple main street town, spectacular surrounding mountains, and verdant fields and cattle lands below, all flanking the Salmon River. Its population had gained about 200 people since 1980, now about 1,000 people call Challis home (the Village Inn where our base camp had been set up, was exactly the same).

We headed north into Montana then east to Virginia City, Montana. Montana is Big-Sky country. It’s as open as a when a very young Sacagawea lead Lewis and Clark through the region in 1805, now cattle populates the great expanses of the country and not the Shoshone and buffalo. We stayed south of Butte and west of Bozeman on two lane highways that were in finer shape than California’s and headed south to the old mining town of Virginia City. What we did find were small and seemingly prosperous towns and ranches. The country was, to use an overworked term, awesome. Then on to Yellowstone National Park.

Yellowstone is worth the visit. I took some good photos of the usual suspects: buffalo and elk, the Old Faithful geyser, mud boils and the forest recovering from the massive fires of 1988. The most traffic we ran into (on the whole trip) was at the entry gate to Yellowstone. One of the funniest incidents were the cars backed up behind a bull buffalo ambling down the main entry road. He was in no hurry and his slow ponderous gate proved it. The town (just outside the entry) is like a cowboy version of Fisherman’s Wharf; I still cringe when I think of it. The scenery and the underlying geology of Yellowstone is very exciting, but for drama and great photo opportunities take your time as you travel fifty miles south to the Grand Tetons and Jackson, Wyoming. 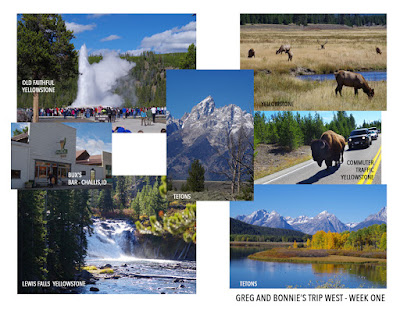 Leg Two:
Wyoming and Utah
While Ketchum and Sun Valley, Idaho seem a tad artificial and pretentious, Jackson (also referred to as Jackson Hole), Wyoming exhibited a warmth and what, to us, felt more like what the modern American west is like. Compact, free parking, good to great restaurants, and high quality galleries, modern conveniences, and an airport that takes in Delta and United flights. Fly fishing is a short drive away, a call will get you guides and float trips to some of the best cutthroat trout fishing in the world (as well as brown, rainbow, and brook trout). These are the drainages of the Madison and the Gallatin and Firehole rivers made famous in a hundred books and movies about trout fishing in the western United States. We will be back, in many ways the trip was worth the discovery of Jackson Hole.

From Jackson we headed to Park City, Utah. While Jackson retained some of the character of the Old West, Park City has all the character of a modern resort subdivision built outside Salt Lake City. But wait, Park City is a modern resort subdivision built 35 miles east of Salt Lake City. The 2002 Olympics made the place and even though there were good winter activities (fueled by Salt Lake and Provo) it was the post Olympic growth of townhome complexes, modern hotels, and professional in-migration that has fueled it’s substantial growth. At over 6,000 feet the air is crisp and dry. The old town is one street (and a hefty climb from one end to the other as well) of the usual shops, restaurants, and even a brewery. It’s no longer mining that drive the economy it’s the tourist and second homes. I think, in time, it will be a big retirement draw as well. Two days was more then enough. But it is the rest of Utah that can take your breath away – for better or worse.