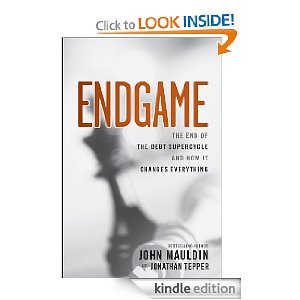 I have just finished John Mauldin’s book  Endgame: The End of the Debt Supercycle and How it Changes Everything (HERE). This is one of the best books to describe what just happened, why it happened, and how we can get of this mess. Well written and easy to understand (for most parts), this should be required reading for every graduating senior in high school. It will prepare them for the rough road ahead until we reach 2020. I also recommend John’s web site, he is the best economic analyst writing today (HERE it’s FREE) .
Have a happy and safe New Year, I look forward to 2012 with excitement and trepidation, may we all be here a year from now wealthier and wiser with great stories to tell (assuming that Mayan Calendar thing doesn’t, like, happen).
Stay tuned . . . .
Posted by Gregory C. Randall at 9:48 AM 2 comments:

All of us here at
Windsor Hill Publishing
and Randall Planning & Design
wish you and yours a
Very Merry Christmas
and want to share this with
you:

Greg and Bonnie Randall
Posted by Gregory C. Randall at 10:26 PM No comments:

Getting From Here to There

Returning to the Scene of the Crime

Later next week we are heading to Chicago. We have spent a long weekend just before Christmas every year, for the past six or seven, in Chicago. The excuse is to go Christmas shopping, while it’s actually to taste winter, wine, and food in one of the best cities in the world. Most of our California friends believe we are mad.
There is a tangible taste and feel to Chicago, it’s like one of the Manhattan neighborhoods, but just one or two, not the whole island. It has the greatest waterfront of any American city and rivals Miami for beachfront. Its lineal parks and harbors along Lake Michigan can be compared to Vancouver BC. Its buildings are, well, just cool. Just stand at the stainless bean in Millennium Park and watch the reflections and you will know what I mean.
Michigan Avenue, State Street, the Chicago River, the John Hancock Building, the Sears Willis Tower are all woven into the fabric of this town. Da Bears, Hog butcher for the World, City of the Big Shoulders, the Second City, White City, Chi-town, the Queen of the West (stole that one from San Francisco maybe), and of course the Windy City. A new one thanks to the Simpsons “The Miami of Canada.” You might even see a man dance with his wife.
It has led the world in architecture and indicted politicians. Its museums rank with the greatest in the world, the Art Institute, Science and Industry, Field Museum, Contemporary Art, Adler Planetarium, Shedd Aquarium, and even the Polish Museum of America (this city had, at one time, the second largest Polish population behind Warsaw). How many of its aldermen and politicians have been indicted is open to debate, but at the state level five past governors have spent time in prison (or soon will). And then there is the president who makes Chicago his hometown.
Our biggest problem is where to eat. Too many places, not enough time. Even Guy Fieri’s Diners, Drive-Ins, and Dives, lists numerous Chicago stops – dogs, burgers, go HERE, for some idea of what the locals really think. But there are great places, but Joe’s Seafood, Gibsons, Tavern On Rush, the Original Pancake House, Carmine’s (you could easily spend a week at this corner of Rush and Bellevue and never leave a restaurant or bar – I’ve done it).
For me, my affair with the Near North Side began back with the Old Town days on Wells Street, the Chicago era of the flower children. These four to five blocks back in the 1960s were lined with head shops, record stores and all sorts of other gigs. Good jazz to the south, good grass to the north. The best pizza ever was in Piper Alley and the best cigar store, Up Down Cigar, is still there today (the current owner grew up in the shop, her parents ran it, they made water pipes in the late 60s to meet the demand). Much of the street is unrecognizable today; there is a very large Jewish senior housing project smack in the middle of where we baby boomers grew up prior to the invention of the Walkman.
I will report more when we return from our fact finding trip. Remember dear readers, I am doing this research for you!
Stay tuned . . . .
Posted by Gregory C. Randall at 8:45 AM No comments:

Getting out of Dodge

I have always believed that the American citizen wants the following: “The biggest house on the biggest lot that they can afford.” Simple isn’t it. And this is in complete sympathy with the fundamental law of good economics: “The market is supreme.”

Why then are we continually bombarded and chastised by do-gooders and New Urbanists who firmly believe that we are on the road to perdition and our just end by living in single family homes in the suburbs? In Joel Kotkin’s rebuke of two op-ed pieces in the New York Times touting the decline of the suburb HERE, he chastises their tenets as “more a matter of wishful thinking than fact.” Yes it is more than wishful thinking on both Chris Leinberger HERE and Louise Mozingo’s HERE part to believe (almost over-passionately), that they will be proved right and the “fringe suburb” and the suburb itself will go the way of the dinosaur.
In both of their arguments they blame the architecture not the economics. The blame the suburbs and the unenlightened, not the marketplace. And to use the excuse of climate change is just plain lazy thinking. And Ms. Mozingo, what the hell is pastoral capitalism? I must have missed that economics lecture. After reading both Leinberger’s and Mozingo’s diatribes I swear I have been pushed back to planning classes of 1970 when Denise Scott Brown, Robert Venturi and Vincent Scully’s musings on Le Corbusier’s fascistic views on urban redevelopment and Las Vegas chic were the rage, Edmund Bacon was required reading on Philadelphia, and Paolo Soleri’s dreams of human anthills were at museums of modern art. Save the world – go vertical.
The average American (and I’m sure far more than 50%) distrusts cities. They see criminals and civil discourse. They see danger and are fearful. They see uncontrolled costs, poor management and excessive tax burdens. Sure they go into the city centers during the day to the museums and to shop but they get out of Dodge before the sun sets. That’s one part of the problem with the current foreclosure issue, fear. Many took advantage of this opportunity to escape and then, combined with stupid lending practices and the collapse of the economy; these otherwise sane people were put in jeopardy.
Urban areas have higher concentrations of voters (obviously) and where there are voters there’s politicians handing out money. Billions of dollars flow into the cities - much without reason or control. So we now have Lexus cities that can’t afford to put gas in the tank. The most current gross excess is the high speed rail that is planned between dense urban areas while ignoring the suburbs it will fly through. Transit only functions both economically and operationally in higher density urban areas, thus to believe that density is good is to justify the outrageous cost per user that will saddle the general public - who live in the suburbs. The market thumbs their nose at these ideas.
EVERY land use is temporary. Every castle, hovel, office tower, office complex, stadium, single family housing tract is temporary, it is only a matter of time. Even the billion dollar cyclotron office building proposed by Apple will be knocked down some day. Every ring of urban growth “fringe” eventually becomes an inner ring of decayed housing ripe for redevelopment Cool Example.  I have planned residential communities on lands that were once insane asylums and office complexes (don’t read anything into that statement). Well planned money goes to where there is the best return; a new freeway interchange may affect thousands of acres and foster growth. A new sewer plant allows for more effective suburban planning, while also clearing up environmental problems.
And what is urban anyway? Every planner and politician has one idea and every home buyer and family has another. The debate is not an architectural one it’s a social issue. It is a debate on the automobile and its attendant demons; it’s an attack on the politics of these suburban residents, and it’s a reaction of their collective “thumbing of the nose” toward the academics.
Yes Virginia, believe in the market and the demographics.
Stay tuned . . . .
Posted by Gregory C. Randall at 10:44 AM No comments: