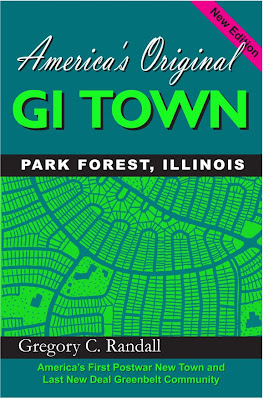 What Others have said about GI Town:


“Randall’s account of Park Forest effectively challenges the conventional distinction between 1930s idealism and the postwar materialism that shapes so many accounts of post-1945 America.”   — Robert Fishman, Journal of American History, author of Bourgeois Utopias: The Rise and Fall of Suburbia“Randall makes a valuable contribution with his book, the first full-length history of the [Park Forest] community... [it] will be a boon to scholars interested in exploring some of the many interesting questions surrounding Park Forest and the postwar suburban phenomenon.” — Robert W. Blythe, Vernacular Architecture Newsletter“Randall has written an engaging and instructive book. What I especially like about Randall’s work is that it provides the reader with a holistic appreciation of a distinctive community. That he does so as an insider makes his narration all the more compelling. “         — Michael H. Ebner, author of Creating Chicago’s North Shore: A Suburban History“This is a sound history, an engaging, crisp narrative.”  — Arthur W. Turner, Journal of Illinois History


SUMMARY:
At the close of World War II, Americans became increasingly concerned about the problem of housing for returning veterans, relocated defense workers, and their families. Designs such as the garden city that dated from the before the turn of the twentieth century  were prominent once again, as planners saw a renewed need for ready-made communities. One such community — among the first and, perhaps, most representative — was Park Forest, Illinois, a privately built and publicly managed town twenty-six miles south of Chicago.

In this book, Gregory Randall presents the history of the planning, design, construction, and growth of Park Forest. He shows how planners — who dubbed the new community a “GI Town”— drew on lessons learned from English garden cities and New Deal greenbelt towns to cope with America’s emerging peacetime housing crisis. He also shows how this new town changed community planning throughout the United States, including its effects on community development up to the present.