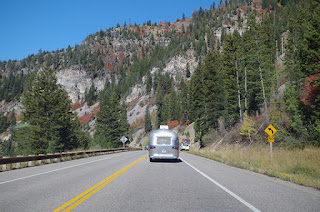 As I said last week, my wife and I have often discussed over the years of traveling the roads of the western United States. Lord knows, I’ve done the LA-San Diego to San Francisco trip maybe thirty times, even the SF to Phoenix interstate dance a few times. Twenty-five years ago we went north to Portland and Bend, Oregon. But the real west, the old west of cowboy lore and Injuns and pioneers and mountains has eluded us – and what about the new West – they were all there to be seen. And we, for forty-five years, had been very remiss.

Leg Three:
Utah and Arizona
Last week’s post followed the Randalls from the Bay Area north to Sun Valley, then Montana, Yellowstone to Jackson Hole, with our midway stop being Park City. After Park City we wound through Salt Lake City. Now, for a Californian (and like most Californians it seems) no one gives Salt Lake much of a lick, but as we drove south on I-15 (one of our few interstate legs) I was stunned by the growth around Salt Lake and Provo. It all reminded me of the Bay Area as it wraps around the southern end of San Francisco Bay.

The last time I drove through Salt Lake City was in 1969; sure I’d dropped in at the airport a time or two while in transit, but never directly through the town or the region. Today it is not a town but a huge and thriving metropolis. Since the 1950s the population of the region has grown 308% from 500,000 to now over two million. Its growth fills the valley from north of Salt Lake City south to beyond Provo. A couple of reasons why: good jobs (highest rate of growth in U.S.), average home price of $204,756, condos in the $160,000 range, and two bedroom apartments rent for $1200. It’s a two and three story urban complex, and with little imagination it reminded me of San Jose. It is, like portions of Idaho (Twin Falls, Idaho Falls), something to watch – homes are affordable, good air, spectacular scenery, and stable economies can lead to great things.

We headed south down US 191, through Price, Utah and to Moab. Spectacular red stone bluffs, deep canyons, and high open desert led to some of the most bizarre rock formation around Moab – a decidedly touristy spot that straddles 191 south of I-70. Well worth the trip. It’s here, in this geologically wonderful region, where many of the National Parks are located: Arches National Park, Canyonlands National Park, Upper Cathedral Valley, Capitol Reef National Park, Glen Canyon National Recreation Area and dozens of study areas, and national forests. We stopped in a small town on a high plateau, Blanding, for the night. The country surprised me; this was ranch and cattle country, great fields of alfalfa and grazing land—no desert here. Actually quite beautiful.

My goal for the trip was Monument Valley and its incredible red sandstone buttes. This is not a National Park but lies totally within the Navajo Nation reservation. These buttes and adjacent formations reach over a 1,000 feet above the valley floor and were one of film director John Ford’s favorite movie sets (Stagecoach, My Darling Clementine, She wore a Yellow Ribbon, to name a few).

From there we headed to Page, Arizona. A relatively new city built to support the construction of the Glen Canyon Dam (1957). This is the gateway to the Glen Canyon National Recreation Area and Lake Powell. Strange but interesting town of 7,000 that sits on a mesa above the surrounding Arizona desert at 4,300 feet above sea level. A few films were made in the area, most notably the disastrous Edgar Rice Burroughs Mars movie, John Carter. We spent one night, found a good Italian restaurant, relatively cheap gas, a Denny’s breakfast (sorry, no Barsoom Martians), and then on to the North Rim of the Grand Canyon.

A left-turn at Jacobs Lake and then a 45 mile drive down a 2 lane cul de sac (longest I’ve driven) takes you to the North Rim of the Grand Canyon. This drive, surprisingly quiet and picturesque, passed an area that, like Yellowstone in 1988, experienced a forest fire in 2006 that has changed thousands of acres of fir and pine forests. Significant regrowth is occurring.

Not much can be said about the Grand Canyon. Its your usual mile deep hole in the ground, ten to twenty miles wide, and layers of rock that can take you back a billion years. As I said—not unusual—but spectacularly fantastic nonetheless. At North Rim your view of the canyon is a thousand feet higher than the south side. There are fewer crowds and there is a sense of intimacy with this wonder, where on the south there are far more crowds. This is a must on anyone’s visit to the region. 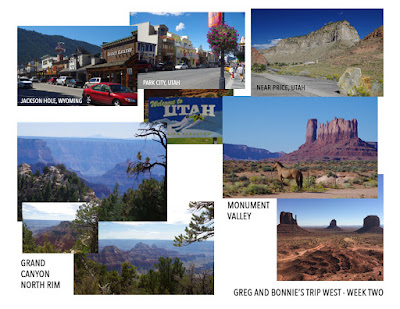 Leg Four:
Arizona, Nevada, and California
One of the stranger places we ran into was on a stretch of I-15 (the interstate between Salt Lake and Las Vegas). What the devil is St. George, Utah? Wikipedia says there are more than 150,000 people in the metropolitan region, mostly white, mostly Mormon. It sits in the middle of nowhere (with spectacular scenery though). Why it is one of the fastest growing urban areas in the United States makes you scratch your head. It is hot and very dry. Its leading industry is tourism (or the flow through of tourists), why else live here, not sure. Butch Cassidy and the Sundance Kid was filmed near here. The chunk of I-15 heading south into Arizona and Nevada is one of the most incredible pieces of highway engineering I’ve ever seen (and scariest).

It was about this time we made a change in plans; after Las Vegas (another mile deep canyon in the middle of the desert), for a day of R&R we were then on to Mammoth and Yosemite in California. We changed our minds and after two weeks of mountains and desert we wanted to see water—so after stopping for a day in Vegas we headed almost due west to Carmel and Monterey, California. Just one note about Las Vegas, it is as much a state of mind as a place. To be honest, after what we had seen the previous two weeks, we were bored with the place.

We’ve driven north and south in California many times, Highway 99, I-5, and Highway 101, but never directly east to west from Barstow to Bakersfield to Paso Robles. While the physical geology is not as impressive as Idaho, Wyoming, and Utah, it does have some of the greatest agricultural lands in the west. But even here you could tell the drought was taking its toll. The land, even for September, looked drier and stressed. We took state Highway 46; if you have a chance take this road. It is quintessentially California: farm land, cotton, nut crops and what I assumed was more than twenty square miles of pistachios – now that is a lot of nuts. Then on through the mountains and down into the “other” vineyard region of California – Paso Robles. In many ways even more dramatic than Napa and Sonoma.

We turned north and almost finished our trip in Monterey (it is 510 miles from Las Vegas - a very long but interesting day). Two days later we were home in the East Bay.

I hope I haven’t bored you too much with this travelogue, but I recommend this trip. The western United States is a spectacular country with amazing things to see (it will test your knowledge and creative use of superlatives – we often just settled on WOW), to experience, and most of all appreciate. Take the time and just do it.