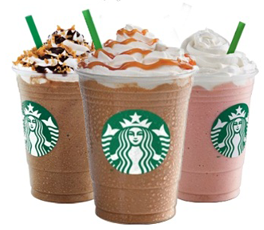 Starbucks – Rusky style
There was quite a kerfuffle last week over the NBC admission that they were violating Olympic rules by allowing their own personal Starbucks loose on the unsuspecting Russians and tourists wandering the venue grounds. Buckaholics became unhinged when they saw these special NBCrs carrying their own Starbucks cups outside their compound and had no way of participating. New Olympic rules forbid this illicit coffee from Russian and Olympic territory – only McDonalds, who had paid handsomely for the right to sell American coffee, was permitted (and maybe a few others). For the Olympics it is "pay-to-play." I can think of many towns in the USofA that would be thrilled for a Starbucks. You wonder how much NBC paid for the creation of the first Russian pop-up Starbucks. GO HERE

Electric News
Tesla's stock is soaring after a bit of a dip toward the end of last year. At Thanksgiving last year it was trading at 120, now it's at 253, a 200% climb. While the bottom feeders are trying to steel everything Fisker Automotive (not to be confused with the scissor maker – an honest mistake - one vowel e for an a) has in its government supported plant, the other government supported electric car maker (Tesla) is going gang busters with huge growth projections hampered only by a reliable battery supplier. The other government supported battery makers lost the ability to recharge their company with money and went upside down. As you well know I am not a fan of government handouts (no matter what the experts say about past successes); it is always quality management and business skill that outweighs any federal handout or sexy brochure, and Elon Musk seems to be that guy at Tesla. The Fisker Karma was cool. Maybe somebody with business sense will make it work, but then again, maybe not.

And it is no surprise that Tesla is looking outside the state of California to build its $5 billion battery plant. Seems that all the nasty stuff needed to make the necessary things that make environmentally friendly cars go is not tolerated in uber-green California. Do as I say – but just not here. GO HERE

Solar Power
While it is grist for the subsidy mill (see above), the solar industry keeps plugging along. I was very pleased to see that Shea Homes is now applying their zero-net-zero homes to their new Trilogy Active Adult communities. Their goal is that the house has zero energy cost to the buyer over the short and long term. Called SheaXero, it is a state of the art solar energy package that, for a limited time, is at no extra cost to the buyer. There is absolutely no reason that these systems don't become mandatory, like modern heating and cooling systems built into homes today. These "modern utilities" are built into the cost of the house and are, for the most part, invisible except for normal maintenance. If we build a million equipped homes every year, think of the environmental and energy savings if each is solar. MORE HERE

Internal Migration
Recent analysis of census data and other population counters such as home building reinforce the fact that people are moving to the suburbs. While some cities have shown some numbers improvement, others have not. New Yorkers (Manhatten) are moving to the Bronx and Queens (yes, these are considered suburbs) and east out of Los Angeles to San Bernardino and Riverside counties. Whether housing costs or safety are the concern are regional issues. But, I can assure you, this is not the last of the discussions or cultural trashing of this post WWII choice of home and hearth (that is where you can burn wood in your fireplace). HERE

And the Density Is What?
Whoever thought that the Shed Shop would become a homebuilder? They are building 99-foot square houses is in Madison, Wisconsin for the homeless and environmentally concerned. Developed by former organizers of the Occupy Movement, this shelter has a bed, a table, and a compostable toilet. The density by my calculation, since most of these people can't afford a car, may be as high as 150 detached single-family units per acre. I'm reminded that after WWII the government put out helpful pamphlets on how to convert a chicken coop into a home. This is, I'm sure, an idea that most cities will politely say no too. MORE HERE