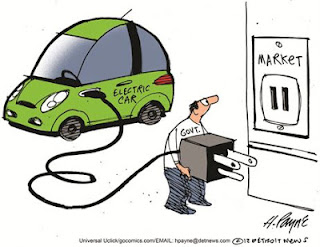 It Comes as No Surprise:
The Wall Street Journal posted a delightful article (for me), about Los Angeleans and their belief in the world as their own entitlement oyster. It seems that Los Angeles International Airport (LAX) has literally begun to pull the plug on free parking for electric cars. Up until very recently you could park your Leafy-tesla-volter in one of their charging stations for FREE for 30 days. The whole article is simply about very rich people (you have to be to afford one of these cars) who feel entitled to all the joys of free parking, free access to HOV lanes, and subsidies from the government. What the problem is now is that there is not enough free parking, well welcome to the real world. CLICK HERE
Ada Louise Huxtable (March 21, 1921 – January 7, 2013)
When I was at Michigan State University so many decades ago, we were introduced to Ms. Huxtable’s critical writings on the great architects of the time, Mies van der Rohe, Frank Lloyd Wright, Minoru Yamasaki, and many others. She, along with other critics of the time, helped to form our opinions and beliefs about architecture and urban environments. Her columns in the New York Times left little in the new architecture unchallenged. For some architects she was like their mother looking over their shoulder, always demanding the best and pointing out the insufficient. She and her pen will be missed. CLICK HERE

Can Housing Get Us Out of Our Mess?
Housing has never been this affordable. Prices have dropped significantly over the past four years (for those not paying attention), mortgage rates are at historic lows, and there is increasing pressure from rising rents. The result is that ownership of single family housing is again on the rise. Contrary to all the doom-and-gloomers who predicted the end of ownership housing as we knew it, it’s making its way back. Good article here in the Washington Post from earlier this week. CLICK HERE

The Premature Declaration of Death
Way back in the early 1990s I was told that master planned communities (MPCs) were dead, too expensive, environmental burdens were too much, infrastructure costs pushed profitability over the edge of reason – especially in California. Then they arose from the grave, then in 2007 fell back into the hole and dirt was being thrown on the body, especially in California. In this post by RCLCO Advisory, they list the top-selling master planned communities across the United States. While the total numbers are less than 2% of the total for new homes built last year, it still shows a trend. This trend is that there are bright spots across the country for MPCs. Of the top 20 communities, 9 are in Texas (Why is it always Texas?), 5 in Florida (the #1 is the huge The Villages senior community), 3 in Nevada (yes, the worst housing market in the U.S.) and the remaining are in Washington D.C., Colorado, and one in California, the huge Irvine Ranch now in its 53rd year (so hardly a new MPC). So nothing in California, totally understandable and predictable – and will be for a long time. CLICK HERE