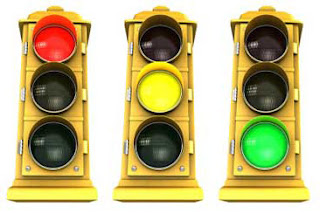 Stop, Wait For It, Go, - Jam the accelerator to the floor.
There is nothing more hated and appreciated (politicians included) than the traffic stoplight. This device, simple in its design, does more to manage the ebb and flow of commerce throughout the world than any instrument yet devised (my guess, in two hundred years, it will still be here, little changed). Imagine for a moment (only a moment) what this device would look like if the National Highway Traffic Safety Administration were to design something today (okay just shake your head and turn away).
According to Wikipedia, the first traffic lights were installed outside the British Houses Parliament in London on December 10, 1868. The first traffic accident, due to this device, was when the gas lantern inside signal exploded a few weeks later, the policeman operating the lantern was either killed or severely injured. We are not sure, traffic report was lost. The first signals in the United States were installed in Cleveland in 1914, the first three colored system in Detroit (go figure) in 1920, and the oldest working patented signal was in Ashville, Ohio. Now, 143 years later, there are three traffic signals for every man woman and child in the world. Or, at least, it seems that way. 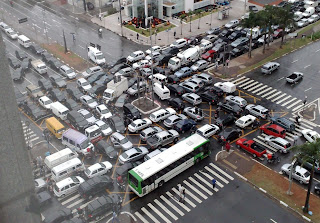 Since those pioneering days the signal has become festooned with pedestrian crosswalk signals, bicycle signals, timers for pedestrians (or countdown clocks for sharp eyed drivers), and left and right turn arrows. The units are set vertical and horizontal, they hang over the street on metal arms, they hang and swing in the air on cables (favorite storm shot for weather), they are stacked eight high, side-by-side, and come in green, yellow, black. You can buy very expensive cases, (favorite of urban designers) or the standard box on pipes.
We all yearn for the old timey standard lights. The lights back then just changed on a set time clock, all very predictable, familiar, and understandable. Now it's a game of "Get the driver!" (I just know there are traffic engineers lurking in unmarked cars just watching us try to dance through the modern intersection). The durations are never the same, sometimes you're first to pass then next time it’s the other guy's lanes. Sometimes the lights change as you enter the intersection after two seconds, no one knows why. Next time it’s a minute and a half (true, I’ve timed one particularly troublesome light on my way home). The engineers mumbled something about traffic flows, optimum timing, computers, interconnections. I’ve got their interconnections right here! 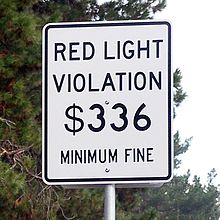 The cost is easily north of $150,000 per intersection, yes that’s true and even more, plus the centralized cost of the urban traffic system. They are all now interconnected with a master at the control, (I try to imagine the scene in the Wizard of Oz, “Pay no attention to the man behind the curtain!”) And where would Hollywood be without the take-over of the Los Angeles traffic system with a laptop as in The Italian Job.
The Italian Job
Yes, let us honor this humble three eyed monster. Let us bow and supplicate, in neat orderly rows, in front of this idol of commerce and industry. Let us pray that the light doesn’t change before my ninety-eight year mother-in-law finishes crossing the street. Let us squint at the pedestrian timer and judge our travel distance and speed before it counts down to zero, our toes dancing on the accelerator. Let us pray that the green left-turn arrow holds until we are through the intersection. Let us wonder at the mercy shown to us by the left turn pocket. Let us give thanks for the free right turn, except when not allowed (see red arrow). And we lift our eyes to heaven in wonder as we try to figure out the twenty signals hung over the street with our eternal question, “Which one is mine?”
Stay tuned . . . .
Posted by Gregory C. Randall at 9:07 AM