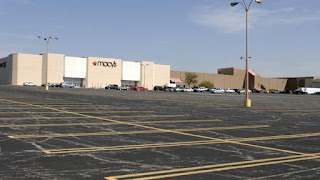 Ten years ago, before the Great Recession, I was a consultant to one of America’s largest retail shopping center owners. The stated goal was to see if we could redesign, repurpose, and reprogram the concept of their existing shopping centers to include housing. We focused on two malls, one in Southern California and another in the San Francisco Bay Area. The idea was to include during the remodel of the mall, a significant number of residential units into the property’s footprint. There was all this delicious asphalt ready for housing; all we had to do was set goals and then a direction.

The effort failed, mostly because of the collapse of the financial markets, housing, and the bankruptcy of the client. However, I still believe that these sites are gold mines for the current and on-going realignment of retail and commercial space for two good reasons.

Additional bonuses are that many have modern infrastructure (more or less) and willing politics. Nothing gets a city’s attention faster than a decline in sales tax revenues. It is projected that a quarter of all malls will close during the next five years.

In some instances these old malls can be rebuilt as town centers, dense residential neighborhoods, or a mix of commercial, retail (service and restaurant), housing (rental and for sale), and even transportation hubs. The old concept of single use zoning is rapidly fading and new concepts are immerging.

The greatest difficulty I found with many of these development companies is a lack of expertise and imagination. They know housing, they know retail, they know office, but they refuse to understand each other’s land uses. This has to change.

It will also require cities to change zoning and land use models. Many communities built into their General Plans a long term program that is now inflexible and counterproductive. No matter how important, it can take years to modify and codify them – this while everything around them collapses and disappears. The market place is not a kind and benevolent beast. As Ludwig von Mises said in his great book, Human Action, “The market is supreme!” Believe it!

We are discovering that now, it is often a hard slap to the face. Amazon buying Whole Foods is just one example; the real examples are the high-end retailers such as Nordstrom, fighting loosing battles to just stay alive over 6% reductions in year to year sales. Shoppers? If you want loyalty, get a puppy.

I worked for an architectural design studio back in the 1970s that focused on the newest thing in retail shopping, the “enclosed” mall. Our clients were the big boys of the day (they are still around, but certainly not the big boys they were). These new malls destroyed the old town centers and main streets of America, especially in the Midwest and the East. And now, the Internet is doing the same thing; it is a revolution that is both cultural and financial. Sure you can point a finger at Amazon, that’s easy. But in reality, it is every brick and mortar retailer who is offering their products online and with a broader selection and home delivery.

The models are changing, the way we shop is changing, what we buy is changing, and most especially why we buy is changing. Even the way we live is changing.
During the last fifty years nothing has occupied architects, urban planners, and city officials more than what will become of our cities. We have had anti-suburbanists, neo-traditionalists, urban revivalists, edge city believers, survivalists, futurists, and even blow-the-hole-thing-up-ists, telling us how cities MUST be redesigned. Most without a clue or real plan.

I remember a science fiction story from my youth where everyone lived in their own little cell, it was a nice cell, comfortable, with entertainment and all the necessities of life, and everything arrived at the door—all you had to do was ask for it. Paranoia raged, we were defensive and protective of our cell—all because we didn’t go out anymore.

Are we there yet?