The Rise of the Parklet

A new and innovative urban design solution looking for a problem is underway in many cities from San Francisco to Philadelphia—the parklet. They have also found a place in Brazil and elsewhere. They are nothing more than taking back the street from the car, one parking stall at a time.

This all started (or so claimed) in 2005 when a San Francisco design company took over a parking stall (by feeding the meters all day) and installing a pop-up park with maybe 176 square feet of sod, benches, and boxed trees. From this radical event it grew nationally until 2010 when San Francisco completed its first permanent parklet (and accompanying manuals, guidelines, and nascent bureaucracy). A revolution began and cities nationwide began exploring opportunities in their downtowns and high traffic areas.

This was not without some concern by local businesses afraid to lose that one stall right in front of their door. But cities used an interesting tactic; if the business (usually a coffee shop or deli) was willing to “own” the parklet, they could use it to expand their customer seats and directly affect their bottom line. Some businesses have even offered to pay for the upgrades and improvements. Costs can run all over the place, from remedial projects that cost $15,000 to sophisticated parklets that can run two or three times that amount. Actually there is no limited to cost, only the imagination. 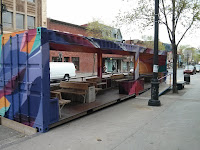 The visual impact on the street depends on the design, the more vertical the better. The most critical design control is the street itself. To be a legitimate parklet, the street paving and drainage remains intact. To start removing asphalt and realigning curbs changes the result to a sidewalk improvement not a parklet. The goal is to be cost effective while also dramatically changing the streets look and add to the pedestrian’s experience. Amenities have included planter boxes, pots filled with annual color, tables and chairs, benches, trellises, shade screens—the list is almost endless.

Some are sleek and modern, others funky and very, very temporary looking, some have used salvage bins with a bench crafted into the side, others have used shipping containers (cut-in windows and doors). One was offered as a mini-golf course. Their primary reason is to increase and expand the pedestrian use of the street.

During the last hundred years the automobile has increasingly demand more and more of the right of way. Wider lanes, bike lanes, on street delivery zones, higher and higher parking rates, it has been a constant war between motorists, bicyclists, and pedestrians. And the car is winning—for now.

The climate on the West Coast and the South favors the permanent installations of parklets. In snowy regions greater concern is warranted and may require more temporary parklet solutions that get setup each spring and removed in the fall. One distracted snowplow operator can do a lot of damage.

The urban street a tough place. So much going on, so much to offer, so much to lose. The more we can enliven and “activate” the sidewalk and storefronts, the better the downtown.