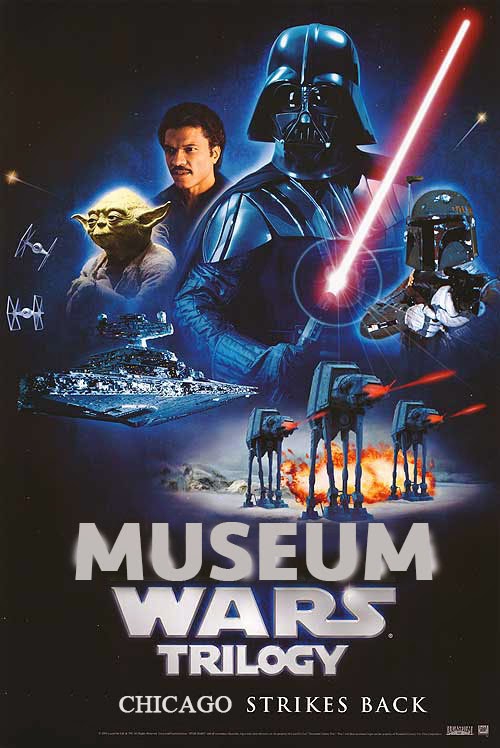 The “Star” war that has been bouncing around the country the last year or so has finally been ended, and the winner is Chicago. The vanquished is San Francisco. As someone who was raised in Chicago and lived for twenty years in San Francisco I followed this battle with interest. And I’m actually happy that Chicago won – simply because it serves San Francisco right, the town hasn’t been able to make a meaningful decision on its waterfront for years (and when they did they ended up with the debacle of the Americas Cup facility).

The future George Lucas Museum will be a collection of Star Wars memorabilia, artifacts, artworks, and other pieces from Mr. Lucas’s collection. One might call it the largest collection of Galactic Kitsch in the whole universe. Don’t get me wrong the original series of Star Wars shook the foundations of the movie world (all except for those cloyingly annoying teddy-bears in the last episode – or sixth depending how you count). I have friends – adult friends – who have life size statues of Yoda in their offices, R2D2 cigar trays, and even get teary eyed over Hans Solo and Princess Lea. And I have a Star Wars watch still in its original tin.

But, and I mean this most sincerely, does this museum rank a location in a national park? So while there is great concern over the loss of the museum overlooking San Francisco Bay and the Golden Gate Bridge (i.e. Senator Feinstein and Congressperson Pelosi) I would offer than it is a site better suited to celebrate those men and women who passed under that bridge to fight in real wars during the last seventy years than in a galaxy far, far, away.

Chicago’s site for the museum is very interesting; I was there in fact, on the exact spot a month ago. I visited the site for two reasons: 1) Located there is a monument given by Mussolini and his fascists. It is an ancient marble column from Ostia, Italy given to the city of Chicago by Il Duce to celebrate the 1933 Century of Progress World’s Fair and the transatlantic flight of Italo Balbo and his seaplanes. 2) In almost the exact spot of the future Lucas museum once stood one of tallest structures in the United States, the 625 foot high Sky Ride tower also built for the Century of Progress World’s Fair. I was conducting follow up research for two of my novels that will be published soon.

Unfortunately the recent internal squabbling of City of San Francisco has lead to the loss of the 49’s stadium to Santa Clara/San Jose, the chaos of the Warriors basketball team’s area location, the loss of waterfront housing, the inability to form a housing program that meets the incessant demands of the high-tech industry, and now the loss of the museum. But the tourists still come and spend their dollars; I would suggest that the City is a bit spoiled.

Chicago on the other hand knows how to get things done – big things. When I was there last month cranes were rising everywhere, the city was in bloom, and there were new parks under construction (a delightful children’s park expansion next door to the spectacular Millennium Park). And outside of the streets in disastrous condition due to the very hard winter the city looked good. So it is no surprise that the George Lucas looked here – we all want to be wanted and loved. So at some time in the far away future I will walk through the grand entry of Chicago’s Lucas Museum with great expectations and memories of my youth – but then again isn’t that what museums are for – to remember the past.

May the force be with you.