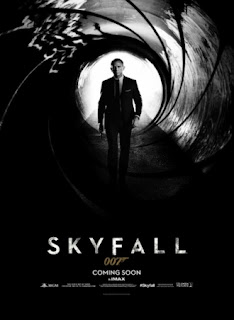 Let’s get the easy stuff done with first: Daniel Craig is back as Ian Fleming’s James Bond 007 in Skyfall, the 23rd adventure in the longest-running film franchise of all time. There that’s done.

Review:
Excellent, probably the best of the franchise, the cast exceptional, the film's texture involving, and the action – well it is a Bond film. So I give it a 8.7 out of 10.

But:
What I really liked was the urban travelogue and the outstanding photography that engaged the viewer, if the director was looking for extremes, he found it. The depth of the night filming was extraordinary and the stage settings left you wondering how real they really were.

Istanbul
The movie opens here and involves the whole city and a rail line. When I visited Istanbul a few years ago I was struck by the crowds and hurried chaotic bustle of the city. This came across in the movie, the roof top chase gave dramatic glimpses of this incredibly dense Asian city. The “Blue Mosque” and the Grand Bazaar and the chaotic feel of the highways and traffic brought it all back in a far too real way. Every city has its beautiful neighborhoods as well as its, let’s say, less than desirable blocks. Skyfall did a good job with Istanbul.

Shanghai
Without a doubt the most dazzling images were the aerials shot of Shanghai at night. I have not been to Shanghai but if it is anything like what’s shown, it has moved up my list of places to visit. The sparkling architectural shots have already been added to the world’s premier architectural firms’ (who designed many of the buildings) web sites and resumes by now. This has been a city that over the last fifteen years has changed its downtown more than any city in the world. Others, more easily, have developed from almost nothing, like Dubai. It is difficult, even in a city like Shanghai; to build within the existing urban structure, after all it is the largest city in China and most probably the largest city, by population, in the world. And Shanghai is old (born circa AD 960), even under European ideas of old cities. Wait for the aerial shots (not CGI enhanced I understand) – they are worth it. By the way many of the sets were filmed in London even though supposedly in China, well that’s the way it is with budgets.

London,
Is my favorite city in the world. The contrasts to Istanbul and Shanghai are intentional according to the PR on the movie – dazzling new to staid old. The comparisons of the rooftop shots at the film’s conclusion to the rooftops of the Topkapi Palace are intentional. The glassy skyline of Shanghai in contrast to carved and detailed stone of London – intentional. There is a solid feel to London: empire, law, parliament, governed civility. It all comes through in direct contrast to the dead city of Raoul Silva, the Bond villain.

Silva’s Dead City
The evil characters in Bond movies all have to have homes. Dr. No, Le Chiffre, Goldfinger, Blofeld, and 18 others, all had some place to call home. But not many spook an entire city out its homes and apartments and move in, such is the power of a Bond villain. The imagery is outstanding, the villain's derelict city seems to sit on an island, worn and abandoned. The sets are littered with crushed bikes and debris. Broken statues litter the plazas, there is a feel of a Eastern European cold war city, crushed and broken, abandoned out of fear (maybe radiation?), and our bad guy moves in. Not exactly the best way to make a real estate investment. But surprisingly the exterior shots are real; it is an abandoned city on Hashima Island in Japan. The story is bizarre and so is the city (GO HERE), scroll down a bit for the info.

And speaking of real estate,
Think of Scotland, think of The Highlander and Braveheart. Then think of owning a chunk of that real estate and a baronial home that is a hundred miles from the nearest Safeway. Yes, this is the anti-urban set for the final dramatic scenes of the movie – in great contrast to China, and Turkey and London. Having been there I can attest to the simple fact that no computer graphic can make it as shockingly barren as Sam Mendes (movie director) achieved filming the real landscape. Well done.

HERE is a great site with some discussion of the sets and shots of locations for the film.

While the movie has its flaws (what Bond movie hasn’t), it is always a magnificent travel guide to the great cities of the world. Sit back and enjoy.

And by the way, my latest book in the Sharon O’Mara Chronicles, 12th Man For Death, is now available at Amazon Kindle. Just click on the book cover and you will travel to San Francisco, Baghdad, Venice, and Paris in a Bond-like adventure of international espionage, murder, and high fashion.