A lot of news has passed over my desk regarding housing, on both national and local (California) levels. Some good, some questionable, and some just head-scratchers. The engine that will drive this economy out of its depression is housing and construction. I posted numerous blogs about this subject during the past year and it’s this collapse that has been the basis for much our ruin. And as I’ve also stated: “All aspects of the industry from development, consumers, and financials, bear responsibly.” I’m reminded of the story on the news recently where we are listening, teary eyed, to the tragic foreclosure of a single mother’s house.  But it does lose some heart-tugging when she does admit she took out hundreds of thousands of dollars in “equity,” for what, I’m not sure. But it certainly wasn’t a predatory lender that made her do it. But I digress, and here we go.

Home Prices Drop and When will They Stop
To be honest, it will stop when there is some balance in the market and foreclosures have reverted to norm. We are continuing to experience a market where 35% of sales are either foreclosures or short sales. We will see ongoing foreclosures for the next year – at least that’s my take. With no pressure on the upside, prices will drop until they can’t (a wise economist said that). Go HERE for a good look at the overall market nationally.
This is also a good update on the foreclosure activity from a usual good source.
It Takes a Tree to Build a House
I came across the following diagram that shows in a diagrammatic tree the current state of the housing market – while more than enough questions arise from terms such as “others” and the source itself, Goldman Sachs, it’s still a beginning point (HERE).
Sympathy for the Suburbs
Diana Lind wrote an interesting essay on the suburbs for Next American City (HERE). She goes after the current exhibit at the Museum of Modern Art (MoMA) in NYC entitled Foreclosed. The idea of an exhibit on the suburbs by a bunch of New Yorkers is actually quite silly, but that didn’t stop them from putting it on. But then again the fearsome social experiment of the suburbs scares most urban dwellers. It’s those evil single family dwellers who brought down the economy, not the arrogant Wall Streeter’s. In the article Diana, quite rightly, points out the naivety and ignorance of the teams with regards to the suburbs. I suggest that you click on the various highlights in the Next American City article to get a fuller understanding. It is one of the best essays to attack those that know the least about the subject, good job Diana Lind. This is one of their answers to the troubles in suburbia, kind of humorous in a scary way.
A Head Scratcher – Affordable Housing  - Its Time Has Passed
With the cost housing dropping and becoming more than affordable why is it that city’s still insist on an affordable housing component in a project – this is especially true in Northern California (where it is 82 degrees today). It has gotten to the point where a builder has to provide affordable units that are MORE expensive than a comparable unit in the same neighborhood. In Donna Kimura’s article (HERE)  all of this readjusting in the marketplace isn’t happening. Affordability is getting worse and worse and is in dire straits (liked the band though). Sheila Crowley, president of the National Low Income Housing Coalition (NLIHC) is in full, protect my job mode, when she states that the millions whose incomes are so low and whose housing costs are so high that all it would take is a few days out of work with a sick child to push them into homelessness. It isn’t an issue of cheap/affordable housing, the issue is who is providing the housing. It is also an issue of income. With housing more than 35% lower in some areas and even lower in others, affordability isn’t the issue.
Enough for now, I could go on and on. But I'm seeing some bright things beginning to show in the denser urban markets of the Bay Area, and in some of the senior housing markets as well. This last market is faced with a growing and needful market of Baby Boomers.

This is a shot of the latest “suburban project” that we are doing with KB Home in Pleasanton, Ca. Other than the stairs (three stories over garage) they are quite nice. 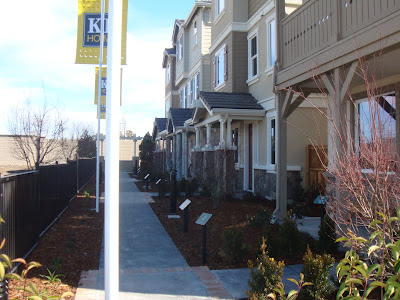