Sometimes in the blogosphere we get caught short for words. Today is no exception and I have to be short.
For the last few weeks I have been downsizing my office from 5500 square feet to 1200 square feet. And my goal today is to finish. A little paint here and a new graphic there and I’m done. Then we can put back up the demising wall I took down five years ago.
This has been cathartic. Boxes of old files from dead projects line the walls (all marked extremely heavy). More boxes are full of those expensive magazines we professionals feel compelled to subscribe to yet, after one reading, put on a shelf – they are boxed and ready to be gone.
This weekend we'll look at a new and larger storage facility for the boxes of files and records, that of course, will never be looked at again. I’ll leave them to some guy to find in some future episode of Storage Wars.
But this has been a chance to really shrink my carbon footprint. Everything is easily 60% smaller, even my own office – command central is half the size it was. Smaller conference room (took two leaves out of the table), sold a bunch of stuff, and only four computers are left from the original twenty-four. Cathartic, yes cathartic. Then back to work!
In addition I am also caught short for words that describe today’s holiday. Veterans Day was formerly Armistice Day that memorialized the end of World War I.
Veterans Day, formally Armistice Day, is an annual United States holiday honoring military veterans. It coincides with other holidays such as Armistice Day or Remembrance Day which are celebrated in other parts of the world and also mark the anniversary of the signing of the Armistice that ended World War I. The signing took place at the 11th hour of the 11th day of the 11th month of 1918 with the German signing of the Armistice. (wikipedia)

We have much and many to thank for their sacrifice of both family and for some their lives. It has become sadly irrelevant and irritating to some Americans of the commitment of a few to our safety and the world’s peace. This is sad, very sad. The great wars of the last century are passed; we can hope that only smaller wars lay ahead. But one thing is certain, our soldiers will always be there to defend us and deter those who wish to do us harm. 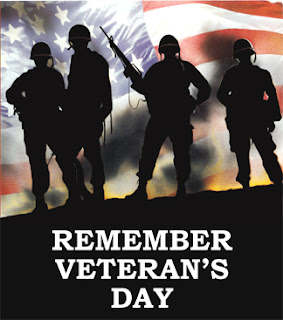