The Future of American Cities May be Vancouver, Canada

I spent a delightful three days in Vancouver late last summer after venturing up into the wilds of Alaska (if you can call cruising “WILD”). Without a doubt, it is one on North America’s greatest cities for a number of reasons: scenery, setting, architecture, recent efforts at preservation and the ability to densify the population without seeming to tax the character and intimacy of the place.

The region holds over 2.1 million people and the city proper, almost 600,000. The sense, to the visitor, is that you are on an island because wherever you look there is water, but in reality it is loosely attached to the mainland – more of a peninsula. The city is a little over 125 years old and still seems to maintain the sense of a northwest community founded on lumbering and trade. It is now an international business center, tourist destination, and in third place for making films in North America. It is a manageable and livable city that the visitor and resident can get their arms around. It is a city of neighborhoods and villages.

What makes for Vancouver’s livability is its density and sense of itself. It is the fourth most densely populated city in North America at 13,829 people per square mile. Only New York, San Francisco and Mexico City are denser. This is the result of a fifty year urban planning effort characterized by high-rise apartments and condominiums and a strong mixture of mixed-use and urban reuse. 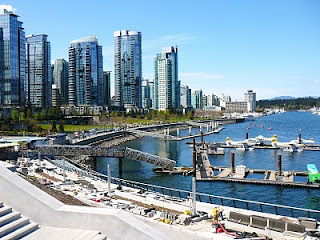 North Side of Vancouver

These verticals are visually represented by a mixture of glass and steel that present a lighter and reflective texture to the skyline. Blue-green seems to dominate the glass, there is a brightness to the structures that seems to diminish the height. There is not the dark glass and heavy blacks representative of the American architecture of the 1960s and 70s (San Diego is beginning to develop this Vancouver visual scene as well). This density and verticality, opens the street to more parks, trees, landscaped bits, and vistas. One can easily imagine the views from the residential units. 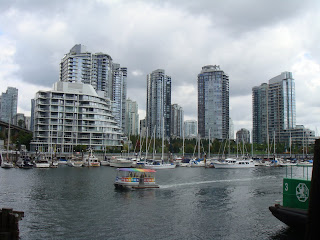 
I am also struck by the blending of cultures – it is here in Vancouver that east meets west better than any large or small American city. Vancouver is a blend of the orient, taken from Hong Kong and Japan, mixed with Canadian and American idioms, and then brushed liberally with European styles (especially Nordic and Scandinavian touches). It is a city that sparkles at night, and even on somber overcast days, creates anticipation. 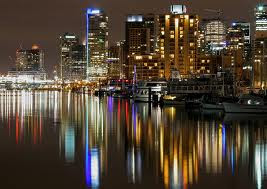 American cities will face incredible pressure while they try to cope with the expected growth of another 100 million citizens and immigrants. We dealt with the post-WWII growth by pushing out into the suburbs, leaving our urban areas to cope and sadly fester for thirty years until the urban rebirths that began in the 1980s (dates and regions can be argued, but it was essentially during the late Twentieth Century). This return to the city by young, old and, most especially, immigrants began to change the American city’s culture and architecture. But it still remains, except for city cores like Chicago, Miami, and parts of San Francisco, low rise and under five stories. Manhattan is different, but the surrounding boroughs are not. Within the model of Vancouver, the streets are less impacted by shadows (the narrower shadow of a high rise is less of an impact, in fact it’s continually changing), than the block by block fifty foot high mega-structures and their impact on the sidewalks, New York does come to mind here. 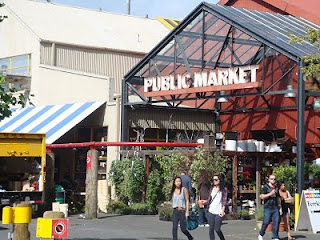 
What makes a great city is not just the food, the historic aspects, the setting, or the architecture – it is the people and the culture they create. Cities with a sense of themselves and higher density give back better restaurants, shops and stores, and evolve a hybrid cultural through its museums, parks, and fairs. Vancouver has salvaged the old nasty bits (like Granville Island and Gastown) and turned them into important community neighborhoods. It is debating its future, even taking the next step of “ecodensity” to find ways of better integrating density, design, and land use in sustainable and affordable ways while trying to maintain livability.

Our low rise American cities and urban areas will face these issues in the coming twenty years. Every city I work in seems to fight the vertical, we are conditioned, for some reason, that height is a blight on the community, thirty-five foot height limits dominate the codes, to push to fifty-five is akin to the worst a developer can do. So we push horizontally, gobble up land, lose our views, and reduce or streets to narrow corridors that serve the community – not contribute to its rich fabric. Parks become postage stamps, street trees are lost, and sidewalks fight with cars and traffic.

I was greatly impressed with Vancouver. Sure there are problems and issues; it is costly to live there. It is, according to some reports, the most expensive city to live in in the world when income versus housing costs are compared. In 2006 it was 13th in the world as the least affordable, and according to Joel Kotkin it may be the least affordable English speaking city, outranking even London. How does this bode for the community’s future when you continually push out many who want to be a part of the city but don’t have the Loonies, Yen, or Euros. It is a very difficult problem that the city has to come to terms with. The market demands the prices, yet, like the suburbs, it forces others out (especially service providers) and even keeps them from entering.

But is still a great city and I can’t wait to return.