A Very Untidy Future For Cities

Believe it or not, we spent two weeks in Southern California on vacation. I live in Northern California and to tell someone that you are, willingly, going to SoCal for pleasure, is for a Californian to admit to voting republican. It is something that one doesn’t, in polite liberal company, admit to. But LA is cool, damn cool in fact – especially when the weather is great (as it was). 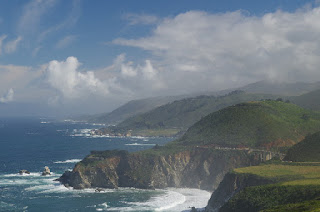 We did something that we’ve never done, drove Highway 1 from Carmel to Malibu, with a stop at San Simeon and Hearst Castle. I recommend it, take the main house tour, that’s the best. It is an interesting introduction to the southern half of California. Fake opulence, decorative arts bought in pre-war Europe at cost, the buildings faux interiors from gutted churches plundered by Franco to pay civil war debts, damn it’s just like a lot of Los Angeles. They even have an English left-over cruise ship.

I digress. The real purpose of this missive (I apologize for my intermittent posts – been too busy with my other books), is the remarkable change in ground transportation I saw everywhere. It is the age of the Chinese-made scooter, bicycle, mini-bike, and their innumerable variations based on who the service provider is. There’s an app for that – literally.

San Francisco and other major cities have been at war with themselves over these devices. The reason for objections and even down right hostility is said to be safety. My take is that the cities are uncomfortable with the idea of being partners with a profit-making venture that literally reminds me of herding cats. You can buy one at Costco for about $500, at $2.00 a mile rent to the provider you can see it doesn’t take long to make a profit. 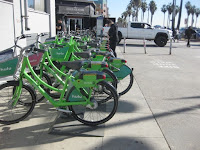 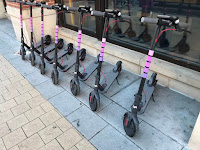 I first saw them in quantity in Santa Monica, the have overrun Venice, and filled the corners of intersections in Long Beach – they are everywhere. Get the app, hold it over the device, get on board, and go. Then you are supposed to return it to a company run (Lyft, Lime, Jump, Spin, and dozens of others) holding area. They will be collected that evening and recharged. I did forget to mention that all these devices are battery run and motorized. You pay by the miles traveled, it’s billed to your credit card, all you do is jump on and drop it when you get there. And I mean drop, we saw them in the gutters, hanging from trees and fences, and stacked like so many discarded bits of junk. 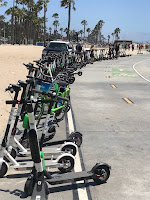 As with everything they are being studied to death. I’m guessing every major city in the world is dealing with this, and spending big bucks, dinaros, pesos, euros, pounds, francs, and yen trying to justify their use and place on their city’s streets (and mostly how to tax the blighters). I wonder what it would have been like if the automobile had been so heavily studied in 1900 when they first arrived (I’m guessing horses would still be popular). There are many similarities.

I’m old. For me to put my feet or butt into or on one of these machines would be a frightening experience. I envision twisted arms, scraped knees, broken wrists, and scarred foreheads. But in Venice and Venice Beach it is the wild wild west of scooters – there had to be thousands everywhere, and they were being used, everywhere. I get it. One more reason not to walk, one more reason not to enjoy the scenery (not when trying to avoid SUVs, buses, and trucks), one more reason to nickel and dime your way to poverty (I exaggerate).

In today’s society it seems that we have come to this: how can I create and then become a service provider of a cool company, so I can skim off a few pennies from my fellow citizens, and all willingly given. There’re cell phones, fuel surcharges, service surcharges (San Francisco’s famous tax on health benefits for waiters), and now scooters and bicycles. At the end of the year I wonder how much this all adds up to.

I’m trying not to act old—just sound old and wise. That’s my prerogative, and as a soon to be septuagenarian, I stand guilty. I remember tiny black and white tvs, aluminum foil antennas, the folk’s first car with air conditioning, Ed Sullivan, transistor radios that would fit in you hand, the change from wooden golf clubs to metal (and now exotics), The Rolling Stones before the wrinkles and heart operations, and when you would actually dress to go out to dinner.

Style, class, propriety, good command of the English language (and quality swearing, not the crap that’s employed today that passes for conversation), proper manners, the ability to use a fork (damn, just look around you at any restaurant), and most critically, civility. That’s where the downfall of this new transportation will fail, cities will outlaw them because the users would not follow the most basic rule of any human community – “Clean up after yourself.” 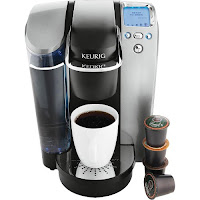 I love all the new stuff: the interconnectivity of Apple devices, the instant communications, car interiors nicer than my own family room, unfettered access to goods from around the world, my Keurig coffee machine (greatest invention of the 21stcentury – so far), Amazon and self-publishing, and statin drugs (see above). I’m waiting to see if this fake meat thing is real.